The 47 km long South Corridor of the Ring Road was elevated, while the 45 km North Corridor will be built on the surface i.e. the development will come to the villages through the land.

After the completion of the South Corridor of the Ring Road, the JDA officials are now preparing for the North Ring Road. A blueprint of development is being prepared in this corridor. The 45 km long ring road of North (Agra Raid to Delhi Raid) will be completely different from South (Ajmer Raid to Agra Raid). JDA is planning separately for this. Under this, the width of North Corridor will also be 360 ​​meters and 90 meters Chaida Transporter Corridor will be built in it.

Preparations have been started to prepare a detailed project report for this. Soon the consultancy firm will be appointed. The ring road is a total of 147 kilometers. A total of 92 km of corridor will be covered as soon as the northern part is formed. After this, 55 km is part of the forward planning, which will connect Delhi Road to Ajmer Road.

What in the North Ring?

Work will start by the end of the
year JDA will start work for the corridor by the end of the year. This time, the consulting firm will co-operate with the land acquisition, tender proposal, reservation letter and site plan of the plots to be given in compensation of the accounts. On the surface, 30-40 villages falling within the scope will be the direct benefit of becoming a corridor. Land prices will rise and employment opportunities will be created by the creation of industrial-logistic parks.

DPR work of North Ring Raid soon: After JDC
Chief Minister’s budget announcement, JDA has started planning to build Northern Ring Raid. A DPR will be prepared soon for this corridor by appointing a consulting firm. In addition to the traffic corridor, this ring raid from Agra Raid to Delhi Raid has plans to develop housing schemes, malls, industrial and logistic park hubs as per the master plan. Survey will also be conducted for this.

2887 crore will be spent on the North Corridor, which is 3 times the cost of the South Corridor. 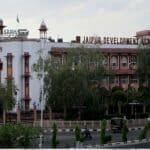 Dhamu And Company
Open chat
1
Need Help ?
Hello
Can we help you?