With the Rera notified by the Union government and now being implemented at state level, the buyer’s sentiment in NCR seems to be on a recovery

NOIDA: Home buying sentiments in Noida is on an upswing. A combination of pre-Diwali sales coupled with responses on the implementation of the Real Estate Regulatory Act (Rera) show people in the city are ready to buy and those who want to own a house are going to increasingly choose Noida over other parts of NCR.

With the Rera notified by the Union government and now being implemented at state level, the buyer’s sentiment in NCR seems to be on a recovery. It has been notified by all Union territories, and is set to be adapted by state government over next few months. The act will come into force all over the country from May 1, 2017. All constructions which have not yet procured completion certificates will now fall under Rera.

The builder community and real estate experts indicate the implementation of Rera will impact buyers in Noida and Greater Noida more than anywhere else in NCR as it hosts maximum end users. The key point of the Rera which makes all builders to keep 70% of the funds in an escrow account to ensure completion is the highlight of the Act, which ensures builders will have to complete the project for which they are securing funds from the buyers.

Over last one month, builders in Noida have experienced a sales hike of over 15% as compared to pre-festival sales of 2015. This has taken place as many builders have secured completions from Noida Authority. Now buyers are interested in ready to move in apartments and Noida has a lot to offer in that segment. With Rera all set to be notified, we expect the buyers regaining faith in the industry further. Over the next couple of months, we expect more sales to pick up in Noida region, specifically, Manoj Gaur, president, Confederation of Real Estate Developers authority of India (Credai), said.

According to experts, the sales would now largely increase in the affordable segment. It is over all good news for Noida real estate. National level players, like Godrej and TATA, have launched their projects here. The pre-Diwali sales saw an upswing. The implementation of Rera will now instill more faith in the industry. Most apartments in Noida are in the affordable range, which is below Rs 4000 per square feet, so we predict sales to pick up in Noida market further. There are also new launches lined up along the Expressway, Surabhi Arora, senior associate director, research, Colliers International, India, told TOI.

Meanwhile, home buyers of Noida welcomed the implementation of Rera. It is a big relief for buyers. Now that the Central government has implemented it, the UP government should set up the regulatory as soon as possible. The entire industry is set to gain from it and it will help attract more buyers as well, Abhishek Kumar, president, Noida Extension Flat Owners Welfare Association (Nefowa), said. Nefowa has been one of the core teams that had organized the fight for Rera campaign by home buyers all over the country.

The builders community welcome Rera, but we are yet to understand the finer points of the act like how the escrow account will be implemented for projects that are almost complete. We hope to get more clarity on the same in the days to come, Gaur further added. 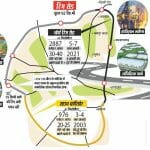